After a sold-out Darwin Festival show, Cinemart is back by popular demand with another live cinema experience, featuring silent film maestro Buster Keaton’s greatest work ‘The General’ played out on the big screen, accompanied by a live original jazz soundtrack by local trad-jazz ensemble The House That Jack Built.

This 1926 legendary action-filled comedy set during the Civil War, follows Buster Keaton as a railway engineer whose train ‘The General’ is stolen by Union spies behind Southern lines. When Keaton’s character steals back his train, aided by his well-meaning fiancée, and is pursued by a posse of irate Yankees, hilarious scenes unfold thanks to his amazing use of props, stunts, and the dimensions of the cinematic frame.

A film of epic scale with Keaton’s trademark physical comedy genius, The General is deservedly singled-out as one of the greatest works of Hollywood’s silent film era and a pioneer of the action genre of filmmaking.
Cinemart is dedicated to hosting unique screen arts events showcasing the work of local and independent filmmakers, artists and festivals in Darwin and the Northern Territory. Curated by local filmmaker Timothy Parish, Cinemart events include live music soundtracks, short film nights and special workshops for the local film industry.

This film has been classified General (G).

PLEASE NOTE
A COVID-19 safety plan has been created for this event.
This is a cashless event.
Post approval has been turned on for this Facebook event, any posts relating to re-selling of tickets or looking for tickets will not be approved. We highly recommend you purchase tickets only through the authorised ticketing agencies listed below.

Cinemart celebrates the best of the silent film tradition with live musical performances that reimagine these timeless classics for a contemporary audience. Music really brings the footage to life in a unique cinematic event revealing how the genius of early cinema legend Charlie Chaplin remains relevant 100 years on.

Presented by Cinemart and Darwin Entertainment Centre in association with Darwin Festival.

Cinemart presents the world premiere of FRACULA! at the George Brown Botanical Gardens, Saturday the 1st of August 2020.
FRACULA! is a live cinema theatre re-imagining the 1931 black and white cinema classic Dracula starring Bela Lugosi with live soundtrack and voice actors. This heavily bastardised version transforms the classic tale of history’s most famous vampire into a modern allegory for oil & gas mining executive hungry to suck gas from the Northern Territory. Think Hercules Returns meets Josh Fox’s Gasland with organ music.
Produced and directed by Timothy Parish, FRACULA! stars local actors Robbie Hoad, Teghan Hughes, Philip Tarl Denson and Kadek Hobman performing live soundtrack and voiceover performances to the classic film.
This hilarious event will have you laughing and crying at the state of the world, but it’s for a good cause!  Profits will go toward the campaign to ban fracking in the NT and the future of a solar energy economy.

“Nothing in this epic visual poem is less than extraordinary.” – Washington Post.

Baraka is a word from the Sufi tradition of mystical Islam which translates to ‘blessing’ or ‘breath of life’. Considered a unique masterpiece, Baraka weaves a spell of breathtaking cinematography that is pure visual poetry. Directed by Ron Fricke (Koyaanisqaatsi, Samsara) and filmed in 24 countries across 6 continents, the film contrasts the spiritual, the materialistic and natural world around us into a mesmerising cinematic portrait of our planet and the miracle that is life.

“A paralysingly beautiful documentary with a global vision—an odyssey through landscape and time—that attempts to capture the essence of life.” – The Irish Times

Seating is limited and we recommend pre-purchasing tickets on-line ticket via DARWIN TICKETS. 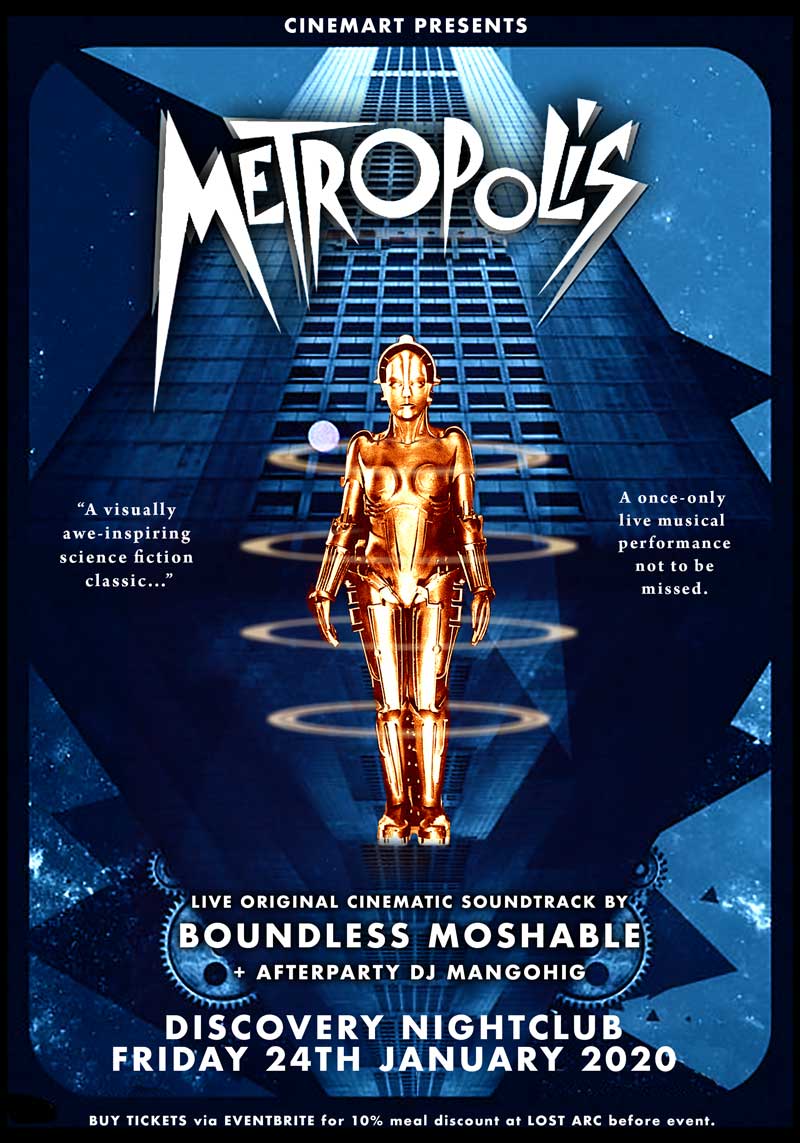 CINEMART presents METROPOLIS with live original soundtrack by art-rock-electronic collective the Boundless Moshable. This unique wet season event re-imagines the cinematic masterpiece for a once-only performance at Discovery Darwin transformed into an art-house cinema venue.
About the film:
With its dizzying depiction of a futuristic cityscape and the struggle between man and machine, METROPOLIS is considered a cinematic classic and the mother of science-fiction cinema. Directed by the legendary Fritz Lang in 1926, its jaw-dropping production values, iconic imagery, and modernist art direction remain as powerful as ever.
The event will also include a short animation DESTINO a surreal collaboration between Walt Disney and Salvador Dali that must be seen to be believed.
Both films will be accompanied by a live original score composed and performed by BOUNDLESS MOSHABLE – a unique art-rock-electronic collaboration between local musicians Gaia Osbourne (violin), Lucas Bendl (drums & percussion), Tom Anderson (bass) and Mats Unden (synthesizer & keys). Blending full-throttle live electronic/rock cinematic sound design, this unique performance will bring the cinematic classic to life for a once-only screening and performance.
The screening will commence at 7:30pm and will be followed by music from DJ Mangohig until late with live visuals by VJ Verb.
SPECIAL MEAL DEAL:
Ticket holders purchased in advance via Eventbrite can enjoy a 10% discount on meals at Lost Arc before the show.
PURCHASE TICKETS HERE:
https://www.eventbrite.com.au/e/cinemart-presents-metropolis-with-live-original-soundtrack-performance-tickets-89710762305?fbclid=IwAR0VyrS8Hlw3SXUejo5MAkQ41PrTjyaiPchoKcIEwa8IiMbDEyp-dkSC2Mg
PREVIEW:
https://player.vimeo.com/api/player.js

In a series of panels and workshops throughout the day on Sunday, filmmakers and enthusiasts will hear and learn about, and experience filmmaking firsthand.

9.30am-11.00am Single Shot Cinema Workshop
Learn the distinctive approach to filmmaking – “Single Shot Cinema” (SSC) – a method of film shooting developed by Leonard Retel Helmrich, where a scene is filmed in a single shot.
Due to limited space, tickets to this workshop must be reserved
http://www.darwinfilmfest.com.au/events/single-shot-cinema-workshop/

11:15am-12:00pm Cinema Tech
A hands on session with some of the newest digital cameras and video technology being used by the film and video professionals in the Top End. Come and see the EPIC RED in action, check out a 360° GO PRO camera setup and more.

1:00pm-2.00pm In Development Showcase
Focussing on emerging producers and new feature length documentary projects currently in production, come and see previews of some of the most interesting new projects being created in the Top End and hear from their Directors and Producers about insights into their creative process. Featuring Emma Masters (Spirits in the Stone), Andrew Hyde/ Kristy O’Brien (Cattle Scars), and more to be confirmed.

3:30-4:30pm Panel Discussion: SCREEN FUTURES
What is the future of the screen industry in the Top End? What are the ways that we can inspire more projects and generate more activity in the screen industry? Featuring: Penelope McDonald (Director of Screen Territory), Dr Aurora Scheelings (Charles Darwin University), Andrew Hyde (Film & Television Association of the NT)
Facilitated by: Timothy Parish

The Darwin Film Society is proud to be supporting these workshops, panels and presentations in partnership with the Film and Television Association of the NT (FATANT), and with support from other sponsors including Charles Darwin University. 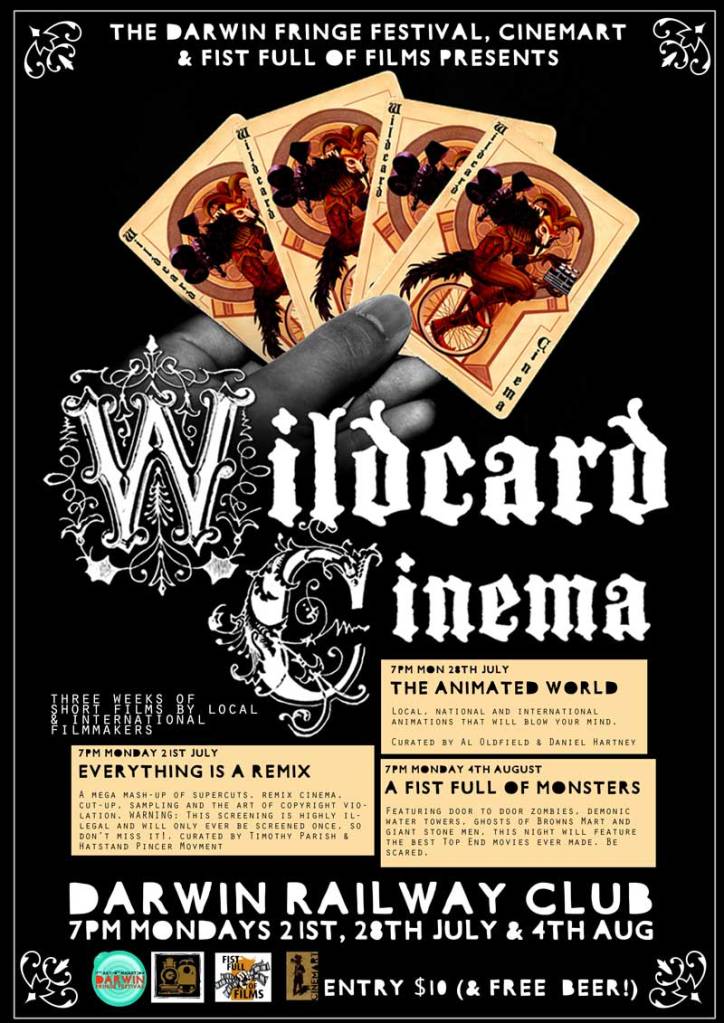 PROGRAMME:
EVERYTHING IS A REMIX – 7pm Monday 21st July

A mega mash-up of supercuts, remix cinema, cut-up, sampling and the art of copyright violation. WARNING: This screening is highly illegal and will only ever be screened once, so don’t miss it!  Curated by Timothy Parish & Hatstand Pincer Movement
THE ANIMATED WORLD – 7pm MON 28th JULY

Local, national and international animations that will blow your mind. Curated by Al Oldfield & Daniel Hartney

Featuring door to door zombies, demonic water towers, ghosts of
Browns Mart and giant stone men, this night will feature the best Top
End monsters movies ever made. Be scared.

“Perth-born novelist JJ DeCeglie makes his feature film debut with JUGULAR, and what a debut it is! Tense, claustrophobic and genuinely harrowing, JUGULAR follows one man’s nightmarish decent into the recesses of his own mind. Recesses from which there are no escape.”
– MonsterFest

JUGULAR is the debut feature film from producer/writer/director JJ DeCeglie. Shot guerrilla on the streets of Melbourne with a minimal budget and crew, the film went on to win Best Film, Director and Actor at the Melbourne Underground Film Festival 2013, and is now
being distributed by Video Archives, with a co-distribution deal also lined up with Monster Pictures.

Presented by the Film and Television Association of the NT (FATANT) at Darwin’s Browns Mart Theatre, the film will include a short introduction and Q&A with writer/director JJ Deceglie.

Want to make a low budget film? JUGULAR won best film, director and actor at the Melbourne Underground Film Festival and was made for less than most people spend on a short film. How did he do it? At this special masterclass, Director JJ DeCeglie will take aspiring filmmakers and experienced producers through the tricks and techniques used to make a low budget film, and make it well!

Presented by FATANT with assistance from Screen Territory.

CINEMART presents BIG NAME NO BLANKET – a feature documentary which tells the extraordinary story of GEORGE RRURRAMBU, the former lead singer of the pioneering Warumpi Band of the 1980s. George features as the charismatic frontman, who combined rock and roll, reggae, pop and traditional culture to spread the message about Indigenous contemporary issues, awakening the Australian consciousness of a third world in its own backyard.

The documentary screening will be preceded by a 1 hour Q&A with Director Steven McGregor –  one of Darwin’s most successful filmmakers – who will explain the process of creating BIG NAME, as well as his work across the NT and recent projects including writing and directing for the ABC TV series REDFERN NOW..

After a short interval – the film will screen at 7:30pm with short film ‘Songline To Happiness’ directed by Danny Teece-Johnson – Winner of Best Film at the ImagineNative Film Festival (Canada)

Entry is free by donation. Reserve tickets below.

There was a fantastic turnout for the  first CINEMART screening in September.

The evening was introduced by guest director Timothy Parish and sound designer Lulu Madill who spoke about the process of creating the independent documentary AYA AWAKENINGS.

Above: Tim & Lulu introduce the film.

Above; Lulu Madill who created the sound design and original score for the documentary explains her process and inspirations in making AYA AWAKENINGS.

SYNOPSIS:
“For all those seeds the vine has touched – and for those yet to awaken…”

AYA: Awakenings is a visionary feature length documentary directed by local filmmaker Timothy Parish, which shares the world and visions of Amazonian shamanism like never before. Exploring the indigenous experience with plant sacrament Ayahuasca and it’s powerful extract DMT.

For more info go to: http://www.aya-awakenings.com